Las Vegas, NV (4/30/2013) It was a bittersweet weekend for GPS Offroad Products at the Stateline Supermoto this past weekend in Primm, Nevada.  Dillon Zimmerman would qualify first in the Pro class but suffer an unfortunate get off in the main event, ending his day and sending him to the hospital.

Although attendance has dropped significantly in recent years, the Stateline Supermoto is one of the premier supermoto events in North America.   It provides a great opportunity for Pro and Amateur ATV racers to compete in this unique format of racing.  The supermoto course was set up in the back parking lot of the Buffalo Bills Hotel and Casino.  About 75% of the course was on asphalt with the remaining 25% set up in the dirt near the offroad truck track.  The event promoters put together a nice little MX  section complete with several table tops, berms and even a table to triple section. 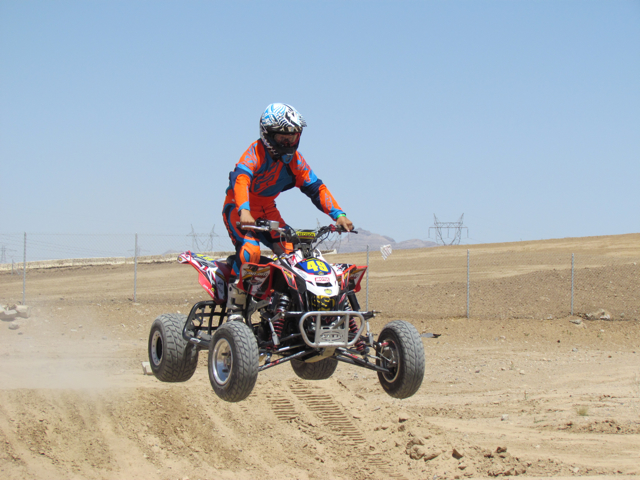 Zimmerman was flying in practice aboard his GPS Offroad/Sun F tires/Can-Am DS450.  The new A-021 flat track tire from Sun F provided excellent grip on the asphalt and the 8.5mm tread depth gave him exceptional traction on the offroad portion of the course over some of the slick tires other racers were using.

A single heat race would determine starting positions for the afternoons main event.  Zimmerman managed to come off the line in second and make a pass on Kenny Pacheco just before entering the MX portion of the track.  He was the only ATV racer jumping the triple and it worked to his advantage.

Because there were no engine displacement restrictions in any of the classes, racers were free to go as big and as bad as they wanted with their engines.  Racing his practice quad, Zimmerman was slightly underpowered compared to some of the machines out there but he managed to put time on Pacheco and the rest of the field on the MX track.  Zimmerman was able to hold off the hard charging Pacheco to take the Heat 1 win and get first gate pick for the main. 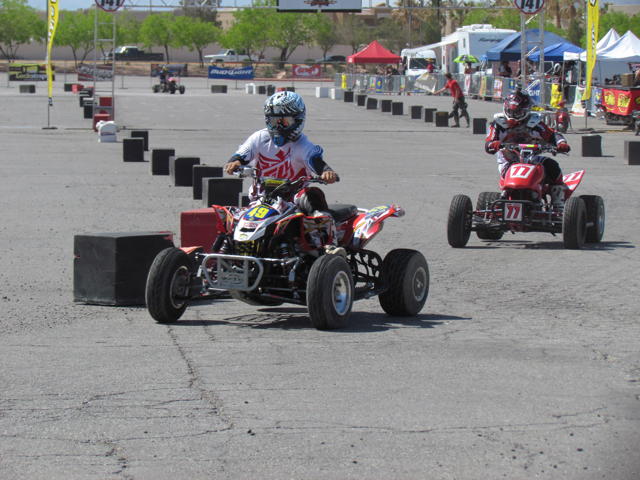 Knowing he was slightly underpowered, getting the holeshot would be important to keep the bigger bore machines from getting out front and running away from him.  For that reason Zimmerman charged hard to the first turn and unfortunately, caught a tuff block with his right front tire causing him to go over the bars and skim across the pavement.

The race was red flagged as medics attended to him and took him to the hospital.  He was able to move all of his extremities but because of the way the quad rolled over the top of him, paramedics wanted him to get checked out further.

Initial thoughts were a possible broken shoulder but an MRI showed it to be from an old injury.  He was discharged from the hospital with some severe road rash and a few stitches in his hand.

“I’m disappointed that a crashed on the main,” said Zimmerman.  “The tires were working great and I was excited to qualify first.  It just sucks because I have a race coming soon and now I have stitches in my hand.”

Zimmerman is scheduled to race the 5th round of the World Offroad Championship Series in Taft California on May 12th.