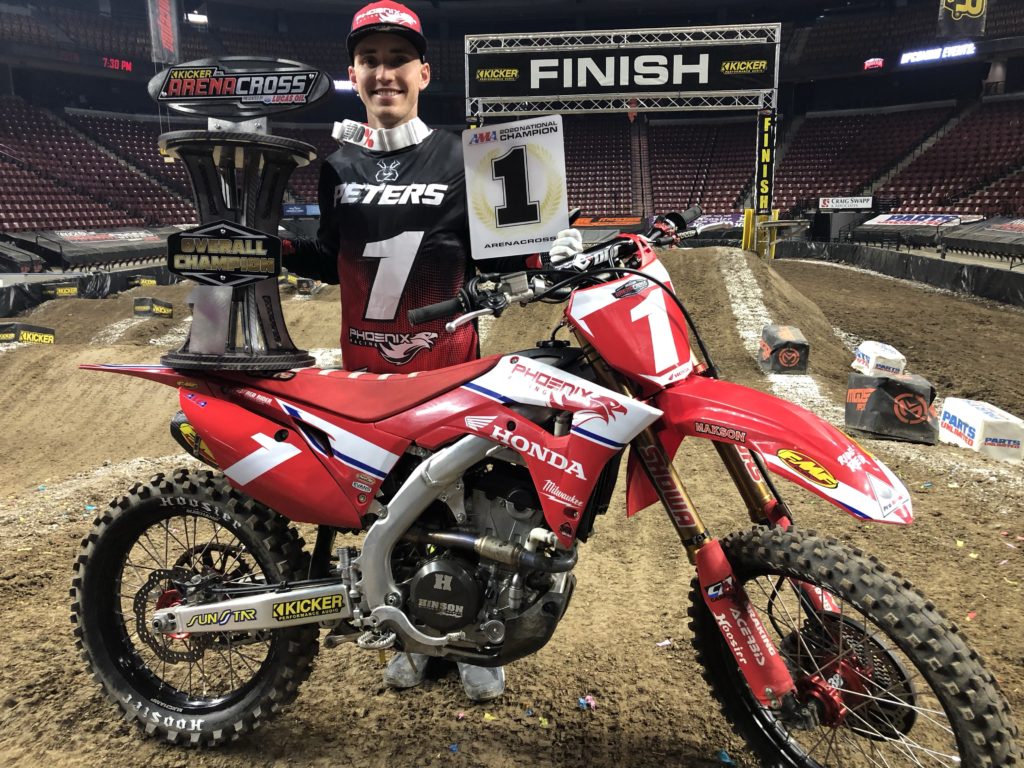 SALT LAKE CITY, Utah (March 2, 2020) — Phoenix Racing Honda rider Kyle Peters
clinched the 2020 AMA Arenacross title a round early this weekend at the penultimate
stop, in Salt Lake City’s Maverik Center.
The performance capped an absolutely dominant streak for the squad, with Peters and
teammate Jace Owen (the 2019 champion) having given the Honda CRF250R an
undefeated record as the series left the previous event. That said, the title wasn’t
assured heading into rounds 10 and 11 in Utah; while taking advantage of a short break
in the series last week by participating in the Arlington, Texas, AMA Supercross round,
both Phoenix riders suffered injuries – in Peters’ case, a fractured triquetrum in his
throttle hand. The 23-year-old from Greensboro, North Carolina, shrugged off the pain
and prepared for battle, his right limb bolstered by athletic tape and a brace. Peters was
able to post steady podium finishes in all four main events on Friday and Saturday,
plenty good enough to secure the crown.
“That was a tough one to finish out!” Peters said. “My wrist was sore, but I’m pretty
headstrong and knew what I had to do to get it done. At first it wasn’t too bad because I
had taken the whole week off from riding, but after racing on Friday, Saturday was
excruciating. I only had to finish the first 250 main to clinch it, but after that I decided to
go ahead and do both. Other than my wrist, it was a great season, and Jace and I
battling each other really helped raise our speed and intensity. I’m happy to earn the
title for Honda and the whole Phoenix team. Now I’ll work on trying to get back healthy
for the end of the Supercross season.”
In the end, Peters tallied 13 main-event wins over the course of the season, and never
finished off the podium.
“We were nervous about the boys wanting to go ride supercross, and we were worried
after they got hurt,” said David Eller, owner of the Salisbury, North Carolina-based team,
which also runs Honda-support efforts in GNCC and AMA ATV Motocross. “It was great
that Kyle was able to race, but we were just hoping he wouldn’t fall again and make it
worse. Fortunately, Kyle rode smart, and we’re happy to keep the title for another year,
as the competition was a lot tougher this season. Now it’s time to turn our focus back to
off-road and ATV racing.”
Phoenix Racing Honda’s next event will be round two of GNCC this weekend in Palatka,
Florida, whereas AMA ATV Motocross – in which Phoenix Racing will be defending the
2019 crown earned by Joel Hetrick – kicks off March 10 in Daytona Beach, Florida.
Meanwhile, Peters and Owen will both miss the final AMA Arenacross round and will return to the AMA Supercorss 250SX East Series when their injuries allow. (Owen may be back in time for this weekend’s Daytona Supercross round.)