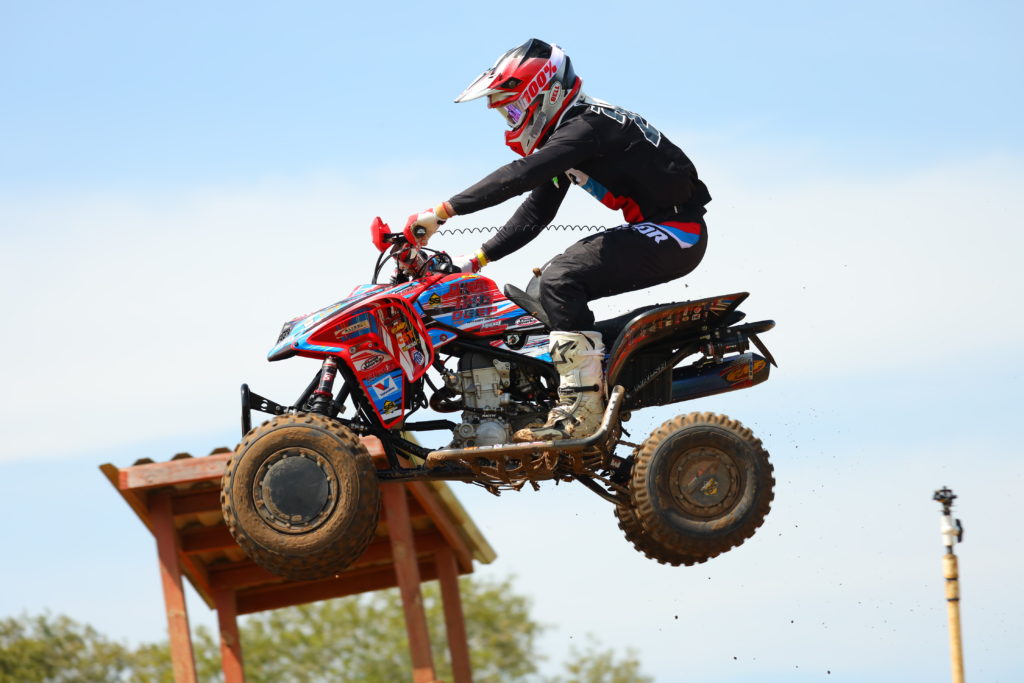 The 2019 season was an unforgettable one for Cody Janssen and his team. Cody was dominant early but, through the middle portion of the year, endured a few tough breaks. This rollercoaster ride was unfamiliar territory for the always-consistent Janssen and, if he wanted to be crowned champion, he would be forced to run the table and win the last few races of the season to do so. With his back against the wall, Cody did exactly what was required of him; he won those final races and accomplished the ultimate goal – Cody Janssen was crowned 2019 25+ ATV Motocross National Champion by a single point!

The feeling of victory is euphoria to a competitor like Cody Janssen, and the taste of victory is made that
much sweeter when forced into a must-win situation. Riding that wave of emotion, Cody knew he would
be back in 2020 to defend his title before he had even arrived home from that season finale last season.
He treasured the idea of defending the championship that he fought so hard to earn in the first place,
he’d fight to defend what was rightfully his. Cody spent the months that followed the clinching of his
title by completing his college degree and growing his wildly popular podcast that has taken the ATV
racing world by storm, the Digging Deep ATVMX Podcast. But just as the season was fast approaching,
the COVID-19 pandemic hit. The entire world, and life as we know it, paused abruptly. Sponsorship
agreements fell by the wayside, funding was slashed, and the ATV Motocross National Championship
series was in doubt – but against all odds and after a nearly two-month hiatus, ATV motocross was back!

The kickoff of the 2020 ATV Motocross National Championship season was exciting, but it came with
plenty of unknowns as well. It was accepted that all involved would have to be flexible and an
understanding that everything could be shut down at a moment’s notice was required. To get the
season started, the series was obliged to travel to areas and venues that would allow for the events to
safely take place. The season kicked off in Georgia at Aonia Pass, where the reigning champ made a
mistake late in the opener when he jumped off the racetrack while leading, costing himself an opening
round win. He followed that performance up with another runner-up finish at the second round in

Tennessee, where the win ever so slightly eluded him. However, after two events, Cody found himself
just one point out of the series points
lead and it was now time to hit his stride! Over the course of the next 4 events, Cody would go on a tear and distance himself from the rest of the prestigious 25+ class. He started off the run with a hard-fought victory at his “home” race at Sunset Ridge, in what was probably the race of the year! The series then headed to a different venue than originally scheduled, Pennsylvania’s Pleasure Valley Raceway, a place where Janssen earned his first full-sized 450cc national win twelve years prior. He won in dominant fashion in PA, stringing back to back wins together for the first time since late 2018. Red Bud is a favorite of so many, Cody Janssen included, but a tangle early in Moto 2 cost him any chance at three consecutive overall wins. He remounted far behind the pack, and by race’s end only needed one more pass for the overall but just couldn’t get another rider in his sights. The next round would take Janssen and his team
to the mountains of southern Virginia, where Janssen would dominate with another 1-1 performance
and put himself in the driver’s seat to defend his 2019 National Title.

This gets us caught up to the most recent round of the ATV Motocross National Championship. The
series typically makes an annual early season stop in the Lone Star State at Underground Mx, but due to
the COVID-19 pandemic, the world’s most prestigious ATV racing series would have to come up with a
new plan. For some time, it seemed like an event in Texas was in doubt, but eventually it was
announced that 3 Palms Action Sports Park in Conroe, Texas, would play host to best four wheeled
racers on the planet. If things went according to plan, Cody Janssen could clinch his second consecutive
National Championship at the beautiful Houston-area facility. If I told you to imagine a racetrack that
was purpose-built to highlight Cody Janssen’s strengths as an ATV motocross racer, what you would envision is a track very much like this 3 Palms Mx venue. The track was built
on sandy soil, so you knew it would get rough and allow Janssen to showcase his fitness and strength – but it was
also very jumpy and technical, a favorite of Janssen’s but a combination that you very rarely find on the same racetrack. The reigning champion was jibing with the facility from the moment he stepped out of the truck, and it showed. In Moto 1, Cody came out of the gate in second place before tripling into the lead just two corners into the race. He then set sail, winning the first moto by nearly 40 seconds over the rest of the competition.

To that point everything had went exactly according to plan, but the weekend wouldn’t be without at
least a little drama. Cody Janssen ripped the Moto 2 holeshot with hopes of a good strong performance
to put a cap on another title, but just a few sections into the race (and already stretching his lead), Cody
came dismounted and found himself laying in the Texas dirt. He got up instantly, dodged the ATV’s of
other riders as they passed by, and began to try and re-fire the engine of his quad. After a handful of
kicks, Janssen was back up and running and now in full send mode! He later admitted that he couldn’t
believe that he had crashed, but said that he was doing the math in his head and figured he should have
enough time to catch the field if he could rekindle his speed from the previous day. But there was a
catch, due to an incoming tropical storm, the races were being shortened and Janssen would have less
laps to make it all happen. He crossed the finish line over 20 seconds behind the field on the opening
lap, and then uncorked next-level speed that he hadn’t been required to show in a while. By the
conclusion of lap two he had already climbed up to second place and had cut the gap to just 8 seconds
behind the leader. By lap 3 the gap was almost nonexistent and in the following corner, Janssen would
make a strong pass for the lead around the outside. The #25 would cruise to an over 15 second victory
and, with that, the mission had been accomplished – another title had been clinched!
CODY JANSSEN IS YOUR 2-TIME DEFENDING 25+ ATV MOTOCROSS NATIONAL
CHAMPION!

“WE DID IT, AGAIN!” Cody said with a smile, surrounded by his loved ones while holding a pit board that read “Back to Back National Champ”. “We didn’t need to win in Texas to wrap up the title, but we managed to do so anyway for safe measure! 1-1 for 1st overall at 3 Palms, but most importantly, after a long crazy year, we successfully defended
our championship! I will cherish the memories we made together this summer forever, grateful doesn’t even begin to describe this feeling. BACK-TO-BACK NATIONAL CHAMPION!”

Cody Janssen’s 2020 season, which ended in a successful title defense, truly made for an unforgettable
year. The season was in doubt, but credit to everyone involved for making it happen. Janssen’s 2020 25+
National Championship is his 4 th National Championship in total, he elevated his number of national
event wins to 42 in total this season, and most of all he got to spend another summer doing what he
loves most with his favorite people on earth. However, such an amazing season would not be possible
without so many incredible supporters. Cody must thank all the loyal listeners and sponsors of his
Digging Deep ATVMX Podcast, the #1 podcast in ATV racing! He must also thank the riders and families
who continue to support the Cody Janssen Riding School. Huge thank you for the continued support to
SSI Decals, CST Tires, Valvoline, Elka Suspension, FMF Racing, and Pivot Works – without the continued
support of these long-time believers none of this would be possible. Thank you to his family, girlfriend
Brooke, mechanic Dan Binder, and the rest of the crew at Janssen Motorsports. Extreme gratitude
continues to GPS Offroad Products, Ameriprise and the Hemauer Financial Group, the Kindrick Family and
Kindrick Racing, E-Z Up Brand, Klink Equipment and Klink Hydraulics, Jay Gobel and Casey Greek of
Impact Solutions, Hinson Clutch Components, Thor MX, The Program Training, D.I.D Chain, Atlas Brace,
Bell Helmets, the Stanfield family and Napa (of Peru, Indiana), Cliff Cox and Oshkosh Tattoo & Good Girl
Piercing, Precision Powder LLC, Ride 100% Brand, Trimble’s Cycle Center, All Balls Racing, Hot Cams, Hot
Rods, Cylinder Works, Vertex, DT1 Filters, Larry Mills and DP Brakes, Rath Racing, Walsh RaceCraft,
Fourwerx Carbon, Sunstar Sprockets, Works Connection, Renthal, Corey Garrison and Parts Unlimited,
the Reynolds Family and Reynolds Body Shop, the Dean and Pauline Janssen family, Pat McGuire, Energy
Release, Pro-Tec Racing, Evans Waterless Powersports Coolant, Blenders Eyewear, First Endurance, Pro Moto Billet/Fastway, Nova Racing Transmissions, Rocket Machining and Design, Mountaineer Brand, Dallas Janssen, and many others. Without such amazing support, continuing the pursuit of dreams and goals would never be possible. Photos curtesy of Tremellen Media House and PH3 Photos.

The ATVMX community will reunite to celebrate Cody Janssen’s latest championship (along with the rest
of its champions) on Saturday, November 14, in Bowling Green, KY. After another special season, we surely
cannot wait. See you there!