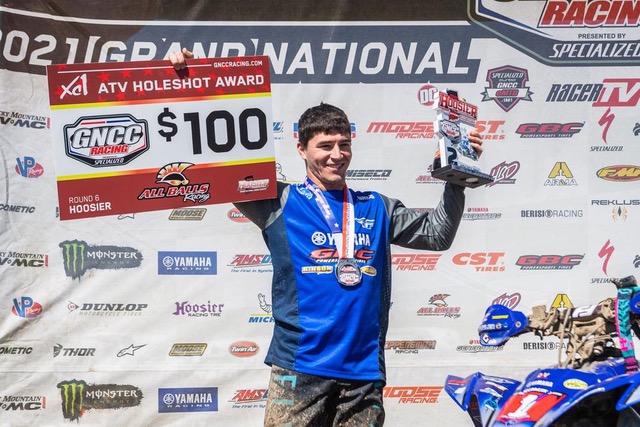 – It was a great weekend at the Hoosier GNCC in
Crawfordsville, Indiana. The location may sound familiar — it’s where Ironman Raceway is
located and the home of the popular Ironman GNCC historically held in October. This past
weekend marked the first of two stops at this location for the 2021 Grand National Cross
Country series and conditions were perfect with a combination of fun and challenging sections on the race course.

Walker Fowler wasted no time getting the show on the road and earning his fourth straight
holeshot award when the green flag waved. Walker was searching for redemption after missing
the mark with his setup at the previous round. However, Walker quickly realized that the
changes went in the opposition direction than he was anticipating.
Despite not being able to ride to his full potential, Walker powered through the
uncomfortableness and held off the hungry group of riders for the first half of the race. But after
an hour of pressure from his competitors, Walker surrendered the top two positions and
reshifted his focus to salvaging championship points.
The setup wasn’t to his liking, but the fact that nothing was broken or bent from any run-ins
worked to his advantage once the white card came out and he was able to cruise back into
second after being almost 40 seconds behind the runner-up on the lap before. Once making the
pass, Walker held steadily onto his position and crossed the finish line second overall at the conclusion of the two hour race.

In his words “We are working diligently to find some answers for my discomfort and plan on coming to our
home state of Ohio for round seven with the top step of the podium being the only thing on our
mind,” explained Walker.
Walker still maintains a season-long podium streak and gained three more points ahead of
second place in the championship standings. The next race, the John Penton GNCC, will be held on Saturday, May 22, in Millfield, Ohio.